14 Most Famous Foods & Drinks in Hawaii

The islands have been inhabited and colonized by many different cultures over the centuries, from original Polynesian explorers of the sea to the British, Chinese, Spanish, Japanese, Filipinos, and Americans. Each one has brought its own unique traditions, whether original occupants, immigrants, or colonizers. This has led to one of the most diverse—and delightful—culinary tableaus of any state in the country.

The only sad thing about this list is there may not be enough time (or room in your stomach) to try all these iconic dishes in one trip.

Pineapple is perhaps the symbol, not just of the Aloha State’s cuisine, but of the Hawaiian spirit of a warm welcome and easy hospitality. Ironically, however, pineapple is known in Hawaiian as halakahiki, or “foreign fruit”, as it’s not technically native to the islands.

Some note that it first arrived on the Big Island in the mid-1500s from Brazil. It was brought by Spanish explorers who traveled with these remarkably sweet fruits because they prevented scurvy on long sea voyages.

Pineapple grew so well in the Hawaiian climate, the archipelago quickly became one of the world’s leading producers, attracting immigrants from all over the world to work the plantations. Today the state accounts for essentially all US output (though Asia is the leading market worldwide).

Dole is one of the leading producers of this subtropical fruit in Hawaii. You can purchase cans of pineapple slices and juice online (affiliate links) through Amazon or at your local supermarket.

Few things are quite as instantly Hawaiian as poi. This dessert is a Polynesian staple made from taro, a root vegetable that thrives in tropical climates and is thought to be one of the earliest cultivated crops in the world. Some date it to the very beginning of the agricultural revolution more than 10,000 years ago.

Poi is as simple as it is nutritious and fun to eat: all you need to do is steam or bake the taro root, mash it, and mix it with some water. This depends on how thick you like it—and scoop it to your eagerly awaiting mouth with your fingers. By all accounts, too, poi is magically healthy with lots of phosphorous, vitamin B, and billions of probiotics for your digestion and gut health.

As popular as poke has become, you can find it in top-end NYC restaurants for $30 or more a bowl—but at its most Hawaiian, poke is simple ingredients all fresh out of the sea. Fishermen at places like Da Poke Shack on the Big Island come out of the waves and right up to the kitchen with their catch in hand. So if you time it right their ahi might wind up in your next poke bowl!

You’ve certainly heard of Hawaii’s love of Spam (maybe that’s all you’ve heard about the islands). And Hawaiians live up to their reputation for obsessing over this ham-derived tin meat, consuming much more per capita than any other state—over 5 million pounds of it per year!

Spam musubi is the most popular way of consuming Spam (and one of the cheapest, to boot): place a slice on top of a wedge of rice and wrap it in nori, or Japanese seaweed, and there you have it. You can also sandwich the rice between two Spam slices, or deep-fry the whole meat-rice-nori trio and then drizzle kabayaki sauce on top as they do at Da Kitchen in Kahului.

You can purchase Spam nearly anywhere and it lasts so long. It makes a great pantry item for a rainy day. There are a few versions available, including the Spam Classic, a lower sodium version, and Spam Lite (affiliate links).

What could be more delicious and satisfying than a heaping pile of white rice topped with burger patties and fried eggs, then smothered in gravy? Nothing. Absolutely nothing.

Hawaii’s most popular comfort food by far, loco moco is often eaten at breakfast—but like any true comfort food, it has no designated hour of the day. Hiloans are especially proud of this dish, as this is the loco moco motherland.

Café 100 is one of the oldest restaurants serving this iconic meal, with 30 different ways of having your loco like Portuguese sausage, spam loco, or the Kilauea loco or beef stew loco.

Your capital city can’t have the oldest Chinatown in the country and not produce an iconic food or two. Originally home to thousands of Chinese immigrants who came to work on Hawaii’s sugar plantations in the late 1700s, Honolulu’s Chinatown is still jammed with shops selling char siu bao, traditional steamed Chinese buns stuffed with roasted pork.

Hawaiians adapted their own version—manapua—and the rest, as they say, is perfectly baked history.

This word translates from the Hawaiian words mea’ono pua’a—literally “delicious pork thing”—or mauna puaa, “mountain of pork,” and that says it all (though there are sweet versions as well with taro, say, or an island favorite, Okinawan sweet potato served at Sing Cheong Yuan Bakery).

Considered by most as the ultimate Hawaiian comfort food, saimin is a one-dish wonder, an edible mash-up of the myriad types of cuisines you’ll find throughout Hawaii. The dashi broth is Japanese, the thick chewy noodles are Chinese, the sausages are Portuguese, the Spam is…well, it’s Spam, and the beef and fried eggs you find in many variations are a nod to Filipino’s love of topsilog.

You can even find saimin with Korean kimchi, and kombu, or dried kelp. Simply put, the combinations are endless, and luckily so are the number of shops and roadside stands where you can satisfy your craving!

You know your cuisine is serious when salmon is the side dish. Lomi-lomi is the Hawaiian term for mixing or kneading, which refers to tossing salmon with other ingredients before serving this iconic accompaniment.

Think ceviche: you’ll find tomatoes, onions, and possibly some chili peppers for heat but not much else—because if you haven’t gathered by now, Hawaiian fare is delicious for sure, but above all, it is simple.

The point here is, lomi-lomi salmon is meant to be paired with just about any other Hawaiian dish you might be craving, from rice and poi to saimin or shredded kalua pork with— you might’ve guessed it—an egg on top.

You know what a luau is, but how about kalua pua’a? This is a kalua pig (pua’a is pork in Hawaiian, and ka-lua means from/of the pit), the raison d’etre of a luau in the first place. The pig is slow-roasted in an imu, a firepit in the ground layered with wood and red-hot stones usually dug in the early hours of the morning.

After being covered by banana leaves and smoking most of the day, the pig comes out to great fanfare—the luau ceremony.

Of course, as famous as this shredded pork has become, you can find recipes ready for home, to enjoy kalua pig without all the digging and dancing—but then again, why would you want to?

Homemade, creamy comfort your mom can whip up in fifteen minutes: what could be better?

Hawaiian mac salad is so popular because it’s so easy and simple, with nothing but ingredients you already have in your kitchen: elbow mac pasta, mayonnaise, onions, carrots, celery, and salt and pepper. And, it goes with just about anything.

The trick for the best mac salad is to slightly overcook the pasta and never skimp on the mayo. Vegans, we apologize—though you can sub Greek yogurt for a non-dairy option if you happen to be on the mainland.

Kalo is the Hawaiin word for taro—a legendary and sacred plant in Hawaiian lore. Perhaps this is the reason why it is so iconic: the root crop has been cultivated for millennia throughout the Pacific, and is considered the very source of life in the Polynesian Creation story.

One version describes how kalo grew from the first-born son of Sky Father and Sky Mother (Wakea and Papa), whose younger brother was eventually tasked with taking care of this precious plant (his older sibling) for all time.

Forget that crunchy, artificially-flavored cherry Sno Cone from your county fair. Hawaiian shave ice is, first of all, shaved and not crushed, meaning you’ll get a much finer, fluffier, and creamier treat than the typical crushed, granular version you might be fair-ly familiar with.

Lastly, if you’re on the Big Island, it’s not shave ice, it’s ice shave (wherever you are on the islands, it’s NEVER shaved ice).
A well-known Maui go-to is Ululani’s: try their most popular, li hing mui (salted Chinese plum), or perhaps wet lemon peel to refresh yourself on a steamy island afternoon.

There are over 60 varieties of mangoes (also spelled mangos) grown in Hawaii, so it makes sense to see the “king of fruits” on this list. Mango trees are so ubiquitous you might hear them referred to as Hawaii’s dooryard fruit since just about everyone knows someone who has a tree.

Just don’t go plucking at will if you happen to see a tree laden with sweet-smelling fleshy gold. Mangoes are considered sacred on the islands, and gifting them is a special sign of gratitude and friendship.

To avoid an unwelcome follow-up from the police, simply head to any roadside stand or a market for your mangoes—and if you receive one from your host, be sure to say mahalo!

Daringly named the best coffee in the world, Kona coffee certainly is one of the most expensive. This is mostly due to the terroir, the specific soil, climate, and growing conditions on the Big Island suitable for making this exquisite roast.

You won’t find this combination of elements anywhere else on the planet, and it’s one of the reasons why Mark Twain famously quipped Kona coffee is considered the best java he’d ever tasted.

Its history is just as remarkable. An unfortunate series of events led the sugar cane industry to collapse on the islands in 1899, and this allowed the coffee business to boom, catapulting Kona coffee to its global premiere spot. You can purchase 100% Kona coffee beans across the US as well as online.

From ancient foods that sprout from the loving union of gods to the king of fruits, to the best coffee in the world, to Spam: Hawaiian food has it all. You might just have to take a couple of trips to The Aloha State, or stay for a lifetime! 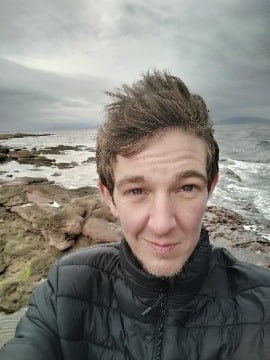 Luke Henkel is a writer, environmental advocate, and born traveler. His passions and his professions have taken him to 30+ countries; from teaching in the Philippines and the Dominican Republic to meditating on Hinduism in India, he always seeks to learn about the local culture, traditions, language, food, and stories of the people. He is also a passionate advocate for environmental and climate justice, focusing on how people are most impacted by our changing world.

6 Best Ski Towns to Live in Washington
Next Post: 10 Largest Cities in Arizona by Population